Are we at a tipping point in attitudes on climate change? Just possibly.

It is possible, just possible that we are at a tipping point in our attitudes to climate change.  Several events in recent days conspire to bring the global community, and particularly those of us in developed countries, to our senses.  Now, I may be proved dead wrong quite quickly, because the Doha climate conference takes place next week.  Formally known as the 18th session of the Conference of the Parties to the United Nations Framework Convention on Climate Change (UNFCCC), and the 8th session of the Conference of the Parties serving as the Meeting of the Parties to the Kyoto Protocol, or COP18 for short, this is the follow-up to that disastrous meeting in Durban a year ago.  The usual cast of over 10,000 from 130+ countries will be there, and if the performance mirrors Durban it may be game over.

But, there is a chance that this time will be different.  We have had two years of unseasonably hot summers leading to crop failures and deaths in several countries around the world, record retreat of the Arctic sea ice this September, and a tropical storm, Sandy, which devastated New York City and the New Jersey shore late in October.  Severe weather events are now happening so frequently that it is possible to demonstrate statistically that climate change has played a role in causing these events.  The costs in human lives, quality of life, and crop failures and damage to infrastructure are so great that they are now attracting real attention from insurers and business leaders, as well as social scientists.  Now, in rapid succession just prior to COP18 there has been a flurry of statements about just how urgent the situation is.

A coalition of the world’s largest institutional investors, responsible for $22.5 trillion, sent an open letter to governments last week calling for them to ramp up action on climate change, and boost clean-energy investment or risk trillions of dollars in investments and disruption to economies.

The World Bank released an authoritative report this week prepared by the Potsdam Institute and titled, Turn Down the Heat.  Why a 4o C warmer world must be avoided.  This document portrays, in chilling terms the path we are on to 2100, and the consequences for temperature, rainfall, sea level rise, and serious storms that will result.  It emphasizes the impacts on developing countries that lack the financial resources to cope with the changes that now appear near certain unless we radically alter our attitudes and behavior regarding emissions of greenhouse gases.

Not to be outdone, UNEP issued its 2012 Emissions Gap Report detailing the gap that exists between current commitments and trends in countries, and the performance on GHG emissions that would be needed to achieve a 2oC warmer world, as agreed to by countries in Copenhagen’s COP15 in 2009.  UNEP also released a somewhat more fluffy document, Bridging Gaps.  Are you?, full of photos of people in developing countries happily doing things to achieve a less carbon-intensive world.  (I’m getting a bit fed up with the penchant of UN agencies to produce colorful documents on serious issues filled with pictures of smiling, apparently well-fed people in rural parts of the developing world.  The images make the issues seem somehow less serious than the text is claiming, and I do not know why this is being done other than through a desire to focus on the positive in the belief that we, like young children, stop paying attention if the news is too bad.)

This flurry of attention comes just after the flurry of news about changing economics of fossil fuel development, contingent on the recent release of the IEA 2012 World Energy Outlook reporting that the US was set to become the world’s largest producer of fossil fuels by 2020, and a net energy exporter before 2030.  In addition, the drive for ‘energy independence’ in the US, which is supported as strongly by the right wing as by the left, provides an easy lever to push for energy conservation and increases in efficiency, and probably also for expansion of non- GHG emitting alternative sources in that country, not to save the climate, but to stick it to all those nasty people in the Middle East.  I don’t care what arguments they use if the US tilts away from its growing missions of CO2, and it looks as if President Obama has levers that did not exist a while ago.

So what is the news which is so bad it is finally grabbing peoples’ attention?  The global investors see the problem in starkly economic terms.  They want sharply reduced carbon emissions and serious policy frameworks that will encourage markets to drive investment in green energy technologies like wind and solar power that can reduce carbon fuel use, and they point to the substantially increased risk for investors if we do not solve our GHG problem.  The World Bank document provides more specific information. 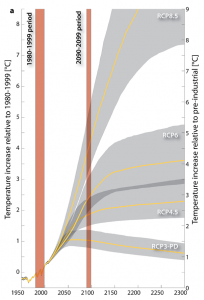 This is Figure 22 from Turn Down the Heat.  It shows probabilistic temperature estimates for new (RCP) IPCC scenarios, based on the synthesized carbon-cycle and climate system understanding of the IPCC AR4. Grey ranges show 66 percent ranges, yellow lines are the medians. Under a scenario without climate policy intervention (RCP8.5), median warming could exceed 4°C before the last decade of this century. In addition, RCP6 (limited climate policy) shows a more than 15 percent chance to exceed 4°C by 2100.  Figure from Rogelj, Meinshausen et al. 2012.

Under business-as-usual (RCP8.5) warming is very likely to exceed 4oC by 2100, but continue to climb to more than 8oC before 2200.  A trajectory like this moves us into a world totally unlike anything humans have ever experienced.  Under the limited policy RCP6.5 – more or less what is likely to happen if existing pledges are fulfilled – the situation is not much better.  Temperatures have a high probability of rising by 3oC by 2100, and the increase is likely to reach 4oC by 2300.  The document describes a 4oC world as one in which

“warming will not be evenly distributed around the world, nor would the consequences be simply an extension of those felt at 2°C warming. The largest warming will occur over land and range from 4°C to 10°C. Increases of 6°C or more in average monthly summer temperatures would be expected in large regions of the world, including the Mediterranean, North Africa, the Middle East, and the contiguous United States. Projections for a 4°C world show a dramatic increase in the intensity and frequency of high-temperature extremes. Recent extreme heat waves such as in Russia in 2010 are likely to become the new normal summer in a 4°C world. Tropical South America, central Africa, and all tropical islands in the Pacific are likely to regularly experience heat waves of unprecedented magnitude and duration. In this new high-temperature climate regime, the coolest months are likely to be substantially warmer than the warmest months at the end of the 20th century. In regions such as the Mediterranean, North Africa, the Middle East, and the Tibetan plateau, almost all summer months are likely to be warmer than the most extreme heat waves presently experienced. For example, the warmest July in the Mediterranean region could be 9°C warmer than today’s warmest July”.

“The projected impacts on water availability, ecosystems, agriculture, and human health could lead to large-scale displacement of populations and have adverse consequences for human security and economic and trade systems. The full scope of damages in a 4°C world has not been assessed to date”.

“Current global emissions are already considerably higher than the emissions level consistent with the 2oC target in 2020 and are still growing.  Current global greenhouse gas emissions, based on 2010 data from bottom-up emission inventory studies, are estimated at 50.1 GtCO2e (with a 95% uncertainty range of 45.6 – 54.6). This is already 14% higher than the median estimate (44 GtCO2e) of the emission level in 2020 with a likely chance of meeting the 2oC target. This is also about 20% higher than emissions in 2000. Global emissions are now picking up again after their decline during the economic downturn between 2008 and 2009”.

Restating this more simply, global GHG emissions, at about 50 gigatonnes CO2per year are already 14% higher than what is needed (44 gigatonnes per year) if we want a world that is just 2oC warmer than at present, and they are also 20% higher than they were in 2000 which is 8 years after 1992 when the world theoretically began on a process of reducing them.  The gap between where they are and where they need to be in 2020 is higher now than it was a year ago!  With this evidence of our lack of progress, it is not surprising that the business community wants us to get serious about reducing GHGs.  We have been failing abyssmally. 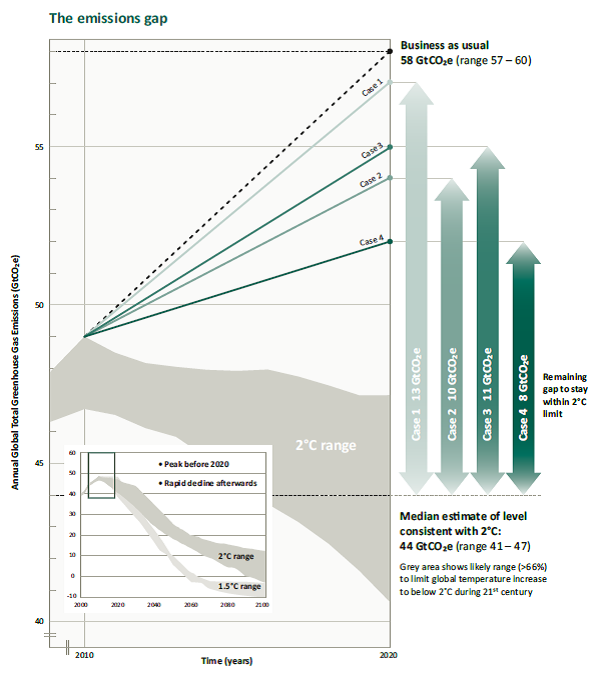 Because many countries, including Canada, have played fast and loose with the data they submit on their GHG emissions, determining the actual global gap depends on assumptions made about how responsible countries will be in fulfilling their pledges.  The UNEP document uses four alternative estimates, and even the most optimistic (Case 4) shows a gap of about 8 gigatonnes CO2 per year.

The facts are out there for everyone to see, the evidence of climate change already happening gets more substantial each month, and the evidence that we have not yet begun to take this issue seriously is damning.  To even talk of the world making progress is akin to telling a person sliding down a mountain that he is halfway to the top.  Tipping points are seldom evident until they are upon you, and I could view all the recent news less optimistically (and probably will once the Doha COP18 is over!).  But I have long believed that when we get really serious about the global environmental crisis it will happen suddenly, and real progress will get made quickly.  I sense there is a slim chance that we are about to change our attitudes and behavior.  I sure hope so.

2 Responses to Are we at a tipping point in attitudes on climate change? Just possibly.