Last week, Drs. Chris Derksen and Ross Brown of Environment Canada published an article in Geophysical Research Letters reporting their analysis of records of summer melting of Arctic snow pack over the past 40 years.  They used data compiled in the NOAA Climate Data Record for the northern hemisphere, and found that the decline in May-June snow cover in Arctic regions especially over the past five years was significant, was faster than any climate models were predicting, and is faster than the decline in extent of sea ice over the same period. 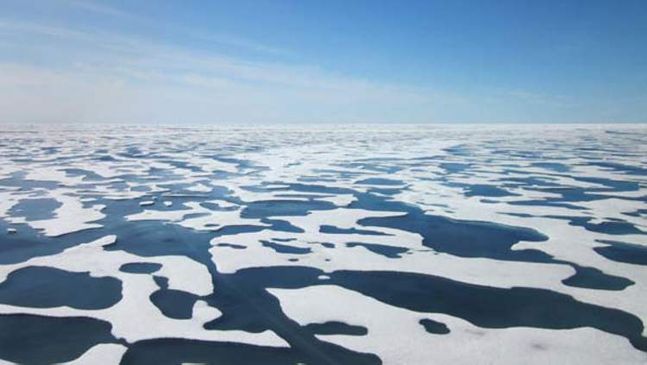 In other words, climate, at least in the Arctic, is changing more rapidly than any of our models have been predicting.  The loss of snow pack exposes land that is typically darker in color than is snow, and therefore will absorb more sunlight and warm up more quickly than if snow still covered it – this is a classic positive feedback loop that will only hasten climate change in future years.

Also published in October was the Conference Board of Canada report, Fuel for Thought: The Economic Benefits of Oil Sands Investment for Canada’s Regions.  The Harper Government has already made use of the economic data in this report to bolster its argument that a rapid ramping up of tar sands oil extraction and export is clearly in Canada’s best interests.  We would all be better off if our government would take a more balanced approach and consider the environmental changes that are happening all around us as well as economic calculations when judging what is best for us.

Derksen and Ross point out that snow pack, as it melts in spring and summer months, produces a valuable pulse of freshwater used by Arctic ecosystems.  With the melt becoming more restricted to the early spring, summer drought is likely to become a more critical problem for Arctic ecosystems than it has been in the past, with the knock-on issues that will result for native peoples still dependent to some degree on these ecosystems for their sustenance.  In addition, the greater warming that exposing of bare ground will facilitate means that the rate of change will very likely increase further.  New records for the lowest extent of June snow pack have been set every year since 2008 in Eurasia, and in three of those five years in North America.

Arctic warming also leads to substantial climate change in temperate climes, as Hurricane Sandy appears to have just demonstrated, so the news from Derksen and Ross is definitely bad.  Their study adds to the growing evidence of the extent and severity of environmental change that has already occurred – Arctic sea ice, increased frequency of violent storms, loss of coral cover across the Great Barrier Reef and across the Caribbean, collapse of oyster fisheries due to acidification.  Many of these changes impose real economic costs on human communities (as citizens of New York and New Jersey are just now realizing).  Many of them also impose social costs ranging from declining quality of life to increasing mortality due to famine or disease. 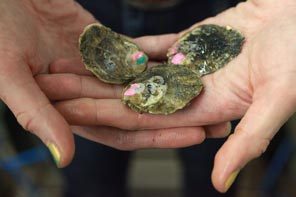 Meanwhile back in Canada, we have no detectable national policy for dealing with climate change, and a national economic policy that myopically focuses on ramping up production and export of fossil fuels, especially tar sands oil, as the engine that will drive us towards an ever more prosperous future.  The Conference Board report is a well-researched document except for one thing.  It has failed to consider how changing climate is going to upset the economic assumptions that underlie its reasoned arguments.  (Actually, I’m being a little unfair here, such risks are considered in Chapter 2, but then put aside, and our government seems not to have read Chapter 2.)

Fuel for Thought reports that there has already been $100 billion in investment in the tar sands, and that they anticipate a further $364 billion (all amounts adjusted to 2010 value) in investment over the next 25 years.  That investment will create 3.2 million person-years of employment in Canada.  That is an impressive number of jobs, but not quite as impressive as it sounds, because nearly a million of those person-years comes from all the employment in grocery stores, gas stations, Tim Hortens outlets, and shops in malls that will spring up to sustain the spending of all the people being employed directly or tangentially in the tar sands enterprise.  The good news is that these positive economic effects spill over into nearly all parts of Canada – that is, the tar sands are good for all of us, not only for Albertans.

Not surprisingly, all this economic activity is going to generate some government revenue from royalties, corporate taxes, personal income tax, sales taxes and so on.  Fuel for Thought estimates that, between 2012 and 2035, the federal government will receive revenues of $45.3 billion, while provincial governments will receive $34.1 billion. The federal revenue comes chiefly from tax on corporate profits, while the provinces gain through income and similar taxes (plus royalty income in Alberta).  Fuel for Thought notes that these amounts represent 18.8% of federal, and 9.5% of combined provincial revenue in 2011, which might explain why our federal government is so enthusiastic.  However, 18.8% over 25 years is only a 0.75% increase per year; hardly something to get too excited about.

To calculate these benefits, the Conference Board has had to make some assumptions.  The most important of these is that the global demand for energy will grow by 90% between now and 2035, and that oil will continue to be the major fuel at 27% of total energy used.  This prediction, from the International Energy Agency’s 2011 World Energy Outlook, is well-founded, but IEA admits it also brings warming of at least 3.5oC.  The same IEA report included an alternative “450 scenario” in which policies are adopted to keep climate warming to 2oC.  In this 450 scenario, global CO2 emissions are reduced to 21.6 gigatonnes by 2035, primarily by shifting the mix of fuels used to supply our energy needs.  Here, demand for oil continues to grow slowly until 2020, then falls until by 2035 it is 30% lower than in 2009. 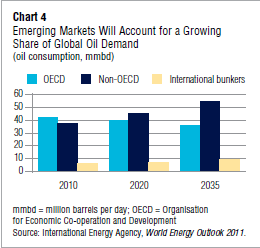 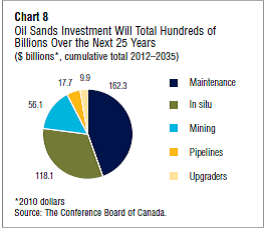 With less demand for oil, oil prices will fall, and the economic viability of tar sand extraction rapidly disappears.  Indeed, continuation of the global economic malaise that has persisted since 2008 has been slowing the growth in demand for oil, and anyone who watches oil prices on the nightly news has seen these fluctuate markedly, and often downward.  There have been occasional articles in the news of tar sands projects being deferred because of lower demand.  In other words, we do not even have to have the world wake up and get busy with the transition away from fossil fuels to have the tar sands expansion program so dear to the heart of our federal government slow down or even wither away.  And yet, coming back to the environment and the news about snow melt, I think it increasingly likely that governments and peoples will soon come to their senses, and recognize the environmental crisis we have created.  And when they do, down goes the value of our tar sands oil.

The Canadian governments, both federal, and in Alberta, would be wise to consider this alternative future in which a difficult-to-extract, and therefore intrinsically expensive form of oil becomes a resource not worth digging up to burn.  Their present effort to rush forward at full speed towards a tripling of production, is resulting in poor decisions regarding the future of Alberta’s environment, poor decisions regarding the freedom of Canadians to debate such things as pipelines through pristine country, and poor decisions concerning ownership of Canada by foreign governments.  And these poor decisions could all well be made for nought.  There won’t be the promised land of plenty due to all those jobs and government revenues, but we will still have made a mess of our land, our democracy and our sovereignty.

Slower growth of this industry can be achieved without special arrangements to secure large inflows of foreign capital.  Long-term the tar sands will retain value as sources of hydrocarbons, and by building Canadian capacity to refine tar sands oil to supply new chemical needs, we can build both intellectual property, and high-tech jobs that could become a lasting benefit for Canada.  We could even make tar sands extraction more environmentally sustainable.  And we could also start planning our own climate policy.