Three articles in the 26 October edition of Science caught my attention and prompted these comments.  The first, by Chris Costello of Univ. of California at Santa Barbara, and several west coast colleagues concerns our harvest of the world’s ‘unassessed’ fisheries.  These are the usually smaller, more local-scale fisheries that are not formally assessed by fisheries scientists paid to monitor them and provide guidance to policy makers.  They are numerous, and together comprise about 80% of the global marine fishery catch.  Assessed fisheries are larger, are actively, if not always sustainably, managed, and comprise the other 20% of the catch.  FAO’s 2011 report on the status of global marine fisheries shows that the annual yield is about 80 million tonnes, or about 2/3 of the total fishery and aquaculture products that currently supply 15% of the animal protein consumed by humanity.  Marine capture fisheries also employ some 34 million people directly and many more in affiliated industries.  So 80% of this global yield, and global employment pool, is definitely important even if it is ‘unassessed’.

FAO’s 2010 edition of The state of world fisheries and aquaculture reported that 32% of 441 studied stocks are either overexploited (28%), depleted (3%), or recovering (1%).  This statement means that one third of properly assessed and managed fisheries are currently being overfished (28%), or have collapsed due to past overfishing and either remain at low numbers yielding very few fish (3%) or are showing some signs of recovery (1%).  FAO does not make any estimates concerning the status of fisheries that are unassessed – the ones yielding 80% of current catches.  Still, that so many assessed fisheries are being poorly managed must raise concerns about the unassessed fisheries.

Costello and colleagues have used a novel approach to estimate the likely condition and trends in the unassessed fisheries.  To appreciate their approach it is necessary to first think about how a population of fish grows.  Put simply, a fish population gets larger when the numbers of young fish being produced through reproduction exceeds the number being lost through mortality.  The population gets smaller when rate of mortality exceeds the production of new fish, and it remains the same size if these two rates (production and mortality) are equal.  In general, a larger fish population produces more young fish than a smaller one does, except that when the population gets very large, shortages of food and other resources lower the effective rate of production of young – populations of intermediate size generally have the greatest capacity to produce new young fish.  Fishing is usually a major component of the mortality of a fish population, and increase in the catch equates to an increase in the rate of mortality.  (There are plenty of complexities to do with the variability of the marine environment that make these simple relationships more complicated, but those can be ignored here.)

One approach to fishery management has been to strive to achieve what is called maximum sustained yield or MSY, by striving to keep the size of the fish population in that intermediate range where its production of young can be expected to be largest.  The rationale is that by keeping the population at this ‘sweet spot’, it should be possible to catch the maximum number of fish per year that that population is capable of producing.  (I explain this more fully in Our Dying Planet, and it is also explained in any beginning text on fishery science.)

The term BMSY represents the biomass (the size) of the fish population at which it produces the greatest number of young fish.  BMSY is the size of the population which will yield the largest possible fishery yield that is sustainable over many years.  It follows that B/BMSY is the ratio of the current size of a fish population (measured as biomass) relative to its size when it provides the maximum sustainable yield.  A value of B/BMSY that is less than 1.0 means that the population is smaller than optimal and only capable of giving a lower yield unless fishing further depresses its numbers.  Conversely, B/BMSY greater than 1.0 means the population is larger than optimal and will also give a lower yield if population size is to remain constant.  Costello and colleagues used the B/BMSY ratio to characterize unassessed fisheries.  Those with this ratio greater than 1.0 were considered sustainably fished, or even under-utilized, while those with this ratio smaller than 1.0 were considered to be overfished.  The methods they used to obtain estimates of B/BMSY are complex and novel, but the approach is logical and seems reasonable. 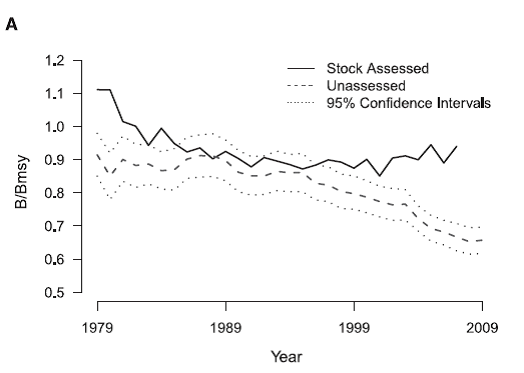 Figure 1A from Costello et al, Science, 2012.  Both assessed and unassessed fisheries show deterioration in ratio of B/BMSY over past 30 years.  Values on average lie below 1.0. 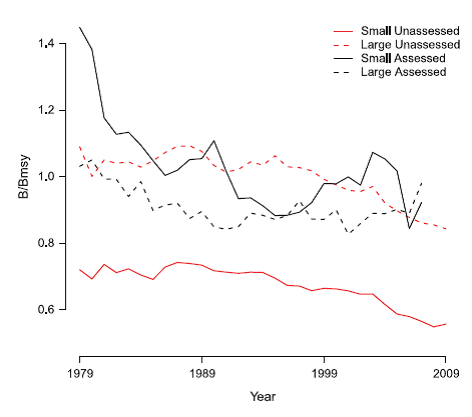 Figure 2 from Costello et al, Science 2012.  This graph splits out larger and smaller fisheries of each type.  Both in assessed and unassessed fisheries, larger fisheries seem closer to sustainability than smaller ones.

As well as graphs of trends through time in B/BMSY they provide maps showing how overfishing varies around the globe. 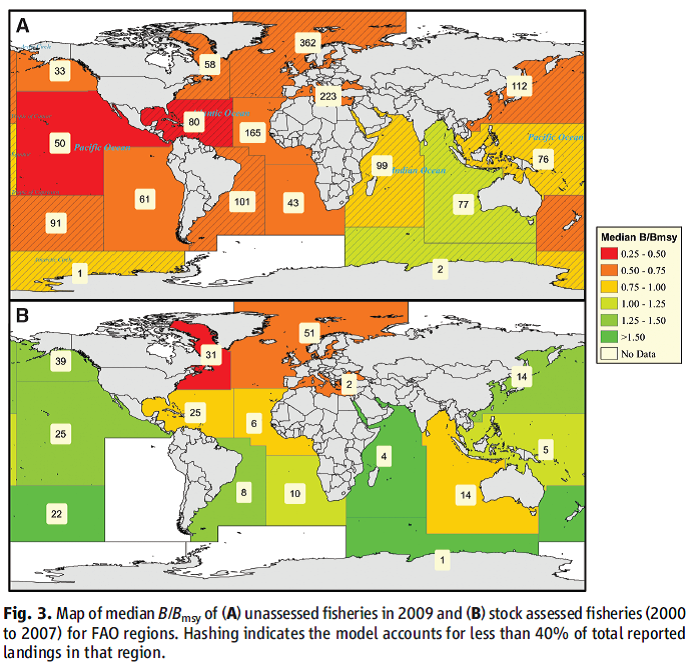 They also estimate that if overfishing could be eliminated globally, and stocks permitted to rebuild, it would then be possible to increase total fishery yield somewhere between 8 and 40% and in a sustainable way.  Given the need for food, its unfortunate that we appear to be very unlikely to take the necessary steps.

The short article by Ellen Pikitch of Stony Brook University is a comment on the approach taken by Costello and colleagues.  She notes the very conservative, even old-fashioned, approach taken with reference to MSY.  As is widely appreciated among fishery scientists, the BMSY statistic denotes a population size that is very difficult to maintain through adjustments to fishery catch, and that is subject to substantial variation caused by natural environmental and populational variability.  And when a population falls below BMSY its capacity to grow back to that size is inevitably reduced.  As a consequence, fishery scientists have increasingly viewed MSY as a catch that should never be exceeded, and have set recommended catches far below MSY as a buffer against to guard against the ecological, economic, and social risks of overfishing that can result from uncertainty.  She notes that the USA, Australia and New Zealand, for example, all have policies recommending rates of catch as low as 75% of MSY.

Pikitch then draws the logical conclusion.  While the report by Costello and colleagues seems serious enough, the results are even more alarming given the reality that a fish population with a B/BMSY ratio equal to 1.0 is almost certain to experience periods of serious overfishing in the real world.  Putting the two articles, and various FAO publications together, I conclude that those fisheries for which we have the best data include many that are seriously overfished, and that the even more important (80% of global catch) fisheries for which we do not have good data are in as bad or worse condition to these.  Further, the situation appears to be getting worse at least over the last quarter century, and there is consequently little reason for optimism.  We really are removing the fish from the sea.

The third article on fish, by Ken Buesseler, of Woods Hole Oceanographic Institute in Massachusetts, concerns some fish we can no longer eat.  He reports on the monitoring of radionuclide contamination of fishery species off Fukushima, Japan, as reported by the Japanese Ministry of Agriculture, Forestry, and Fisheries (MAFF). 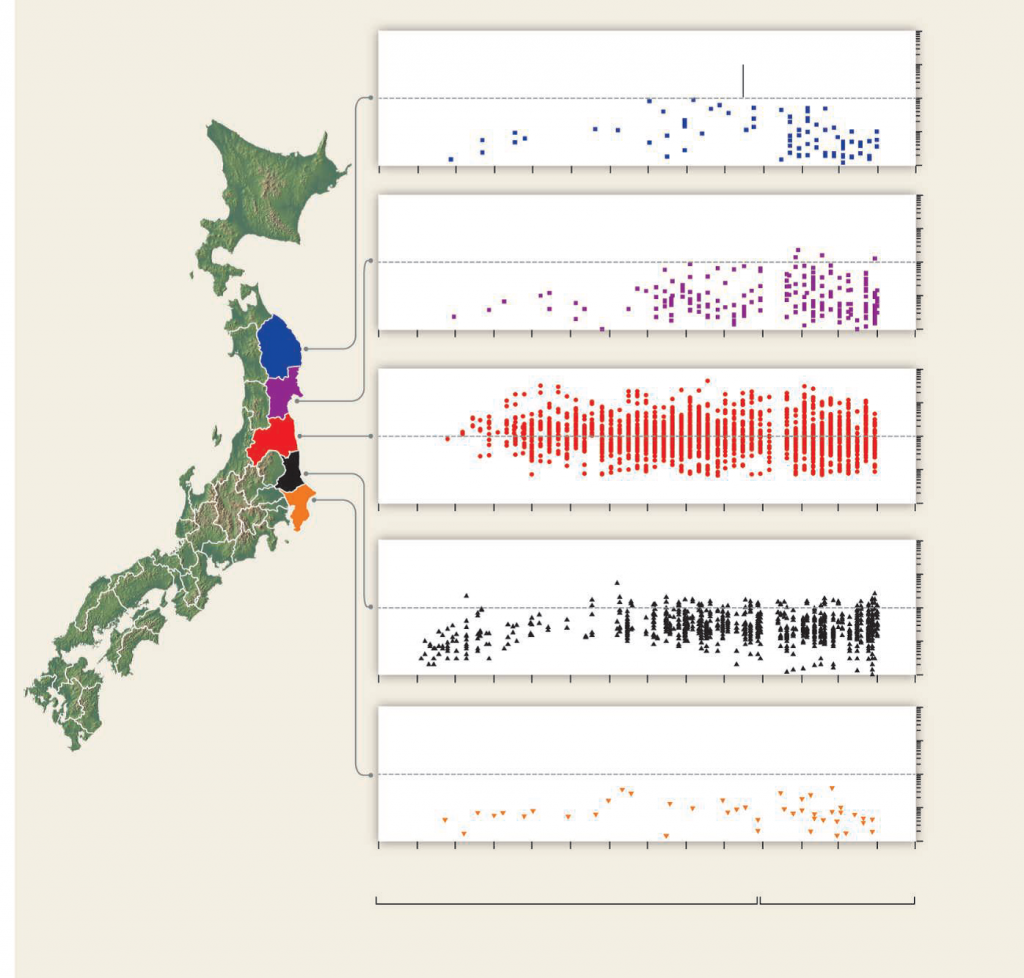 The figure (above) accompanying his article tells most of the story.  The MAFF results show that total cesium levels in demersal (bottom-dwelling) fish, including many important commercial species, are highest off Fukushima and lower in four prefectures to the north and south (see the figure — dotted line across center of each graph is the 100 Bq/kg wet weight limit set by Japan and about 40% of the fish tested from Fukushima fall above that line). Fishing for these species is currently banned off Fukushima, where 40% of fish are above the new regulatory limit of 100 Bq/kg wet weight.  (A Bequerel is a rate of 1 radioactive decay per second.)

The radiation is chiefly in the form of Cesium-134 and Cesium-137, elements that bioaccumulate to only modest degree in marine fish.  The uptake of Cesium from the environment is balanced by a loss rate back to the environment of a few percent of the load per day.  Thus, one notable conclusion from the results reported is that Cesium remains high in Fukushima fish one year after the accident because Cesium is continuing to leak into the waters, whether from the sediments or from continued leakage from the nuclear power plant.  The Japanese limit of 100 Bq/kg wet weight is quite conservative, but the continued presence of Cesium in these fish, with no evident improvement over a year is cause for concern.  The Fukushima accident seems likely to have long-term environmental and health consequences.