Erosion of environmental protection, and of democracy in Canada: C-45, environment, pipelines, and tar sands

Here we go again.  I’ll be brief, but the Harper government has tabled its latest budget bill – 443 pages stuffed with things that should not be there.  What will it take to get them to play by the rules?

Back in the Spring, budget Bill C-38’s 425 pages included substantive changes to environmental laws, primarily weakening them, and was roundly criticized.  Now Bill C-45 includes substantive changes to the Navigable Waters Protection Act, and the Environmental Assessment Act (that was already extensively modified by C-38), and changes the definition of a “native fishery’.  It also creates an entirely new Act governing the construction of the sorely needed second bridge between Detroit and Windsor, and Act which exempts the massive bridge project including the roadways leading to it from a number of federal laws under which permits, approvals or authorizations would normally be required. 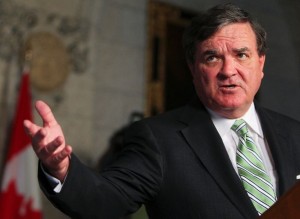 Here is Honest Jim Flaherty claiming there is nothing hidden in those 443 pages (image Andre Forget, QMI Agency).

The environmental changes all move towards reduced oversight, simplified regulatory structures, and cancelled requirements to act in ways that sustain the Canadian environment.  For example, the Navigable Waters Protection Act is renamed the Navigation Protection Act, and will now apply only to the three oceans and just 97 lakes and 62 rivers.  Canada has 32,000 lakes larger than 3 km2 in area and many smaller ones as well as numerous rivers – the previous Act applied to all navigable waterways.  Stripping away this protection opens up the possibilities for dams, bridges, pipelines, diversions and so on.

“Pipeline development is certainly among the major industrial sectors that are top-of-mind as we consider the modernization of our regulatory system,” said the briefing material, prepared for a Jan. 26 meeting between Kent, his former deputy minister, Paul Boothe, and the Canadian Energy Pipeline Association.  Nearly one third of Bill C-38 was dedicated to changing Canada’s environmental laws, offering new tools for the government to authorize water pollution, investigate environmental groups, weaken protection of endangered species, and limit public participation in consultations and reviews of proposed industrial projects.

Apparently as a result of the changes in Bill C-38, the Canadian Environmental Assessment Agency reported in August that it was able to cancel about 3000 assessments, including about 250 reviews of proposed pipelines.  The changes to the Navigable Waters Protection Act and other environmental laws included in C-45 appear to extend this process of stripping back Canada’s capacity to manage its environment, all in the name of removing red tape and facilitating business activities.  That the government seems driven to make these changes in secret suggests very strongly to me that the changes would not survive proper scrutiny.  Once more we Canadians are being asked to trust our government to look after us by keeping our economy strong.  I’d prefer that they keep our democracy strong, and keep our environmental protections in place. 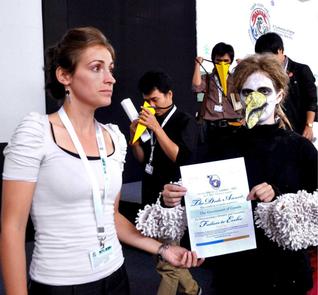 Incidentally, Canada was just awarded the Dodo Award at the Hyderabad, India, conference of the Convention on Biological Diversity, for its failure to act to prevent the ocean fertilization scam off Haida Gwai, as well as for several other offenses.  A few more omnibus budget bills and we will have no laws to apply in such cases, even if we wanted to.  Our environmental reputation falls lower every year.  But, our economy is strong, or so our government tells us.

One Response to Erosion of environmental protection, and of democracy in Canada: C-45, environment, pipelines, and tar sands