Environmental Crisis? Not for Our Political Leaders

Most people in North America are aware that we have been having a particularly warm and dry year.  Many of us attribute this to global climate change.  Some of us are concerned about this.  Others of us maintain it is ‘natural’, ‘normal’, ‘nothing to worry about’, or ‘part of a natural cycle’.  And some of us just tuck this information away in a dim, dark corner of the brain and forget about it.

The warming is particularly pronounced in the Arctic, and on August 26th, 2012, the extent of the Arctic sea ice fell below the minimum ever recorded (September 18th, 2007).  NASA’s National Snow and Ice Data Center (NSIDC) provided these maps and graph making this point quite clearly. 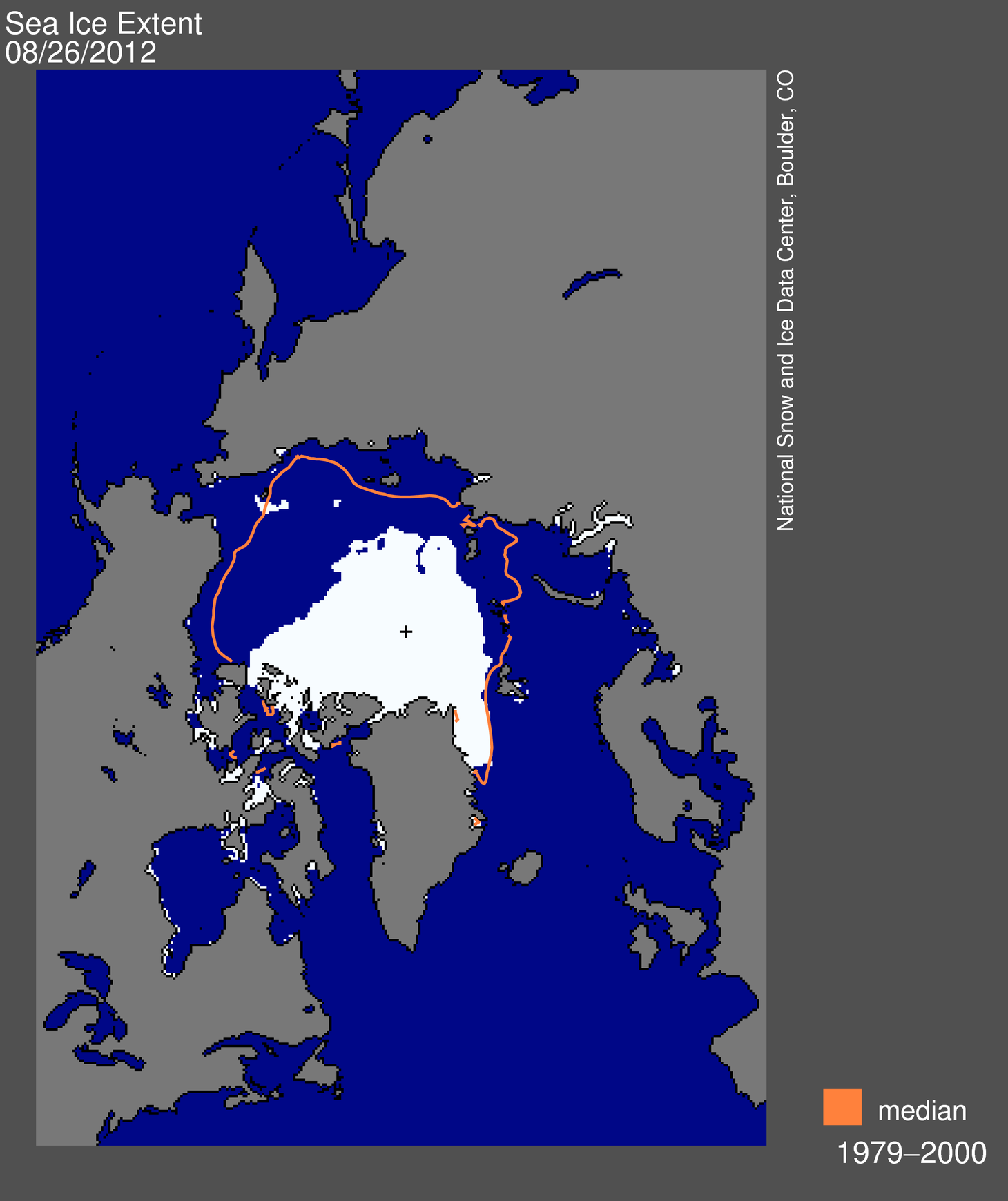 The graph shows the path of sea ice melting during the summer season for several years, compared with the average over 1979 to 2000.  It’s pretty clear that 2012 is going to be an exceptional year and will go well below the last record year (2007).

This rapid melting of the Arctic does bring new opportunities for shipping, new access to the mineral riches that may be there, and other new opportunities that might lift the economy and sustain Inuit communities as their traditional way of life becomes less possible, perhaps even impossible.  But it also brings the likelihood of even more rapid warming in the future, because the loss of all that reflective ice makes the Arctic Ocean a much better place to trap light from the sun and warm up as a result.  What is this future going to look like, and should we be redoubling our efforts to trim the emissions of CO2 that are responsible for it?  Should not the very rapid changes in the Arctic environment, that Inuit leaders have been commenting on for some years now, be a point of concern for government leaders?  Well,….. apparently not.

Canada’s Prime Minister Stephen Harper has just finished his annual pilgrimage to the Arctic.  He did lots of things up there.  There were photo-ops every day.  He made announcements on all sorts of topics (in some cases these are re-announcements because I guess there are just not that many news-worthy accomplishments to talk about when you govern a country of 34.5 million people).  But did he discuss the unusually rapid melting that now is taking place?  Did he maybe reflect that this is a clear sign that climate is changing faster than the IPCC anticipated, and certainly faster than those who do not “believe in” climate change might expect?  Did he even mention it at all?  Actually, he did.

On one of his many photo-op announcements to the press, which concerned the opening (in 2017 no less – I guess he wants to announce it now in case he is not Prime Minister in five years’ time) – I digress – the opening of the Canadian High Arctic Research Station, the press release included “environmental stewardship and climate change” among the priorities for the new station.  Of course, they were listed below both “resource development” and “exercising sovereignty” – Harper has not completely lost his sense of what is really important.

And when asked a question about climate change he replied, with just a touch of irritation,

“Look, obviously ongoing climatic changes are something we watch carefully — it’s one of the reasons for the government’s concern about the growth of future shipping in that area.”

I’ve previously commented on the new national park Mr. Harper announced during this extended Arctic junket.  It’s called Nááts’ihch’oh National Park, and it abuts Nahanni National Park further increasing the protection afforded to that iconic World Heritage  Site – the Nahanni River watershed.  Harper visited the site, provided the photo-op, and announced the creation of the park.  Then he skirted around a question from a reporter.  It seems the park, which will be 4,849 km2 in area, is not the park it might have been.

The Nahanni National Park, 30,050 km2 in area, was established in 1976, and became the first site world-wide to receive World Heritage designation in 1978.  Seems we made parks a bit bigger back then!  However, Nahanni National Park stopped at the boundary between traditional lands of the Dehcho First Nation in which the park is located, and the Sahtu First Nation, in whose lands the upper headwaters of the Nahanni River lie.  The new Nááts’ihch’oh National Park lies within the Sahtu lands and has been established with their support, but it does not do what it was going to do – protect those headwaters.

In the course of planning, three options for the new park were drawn up, and presented by Parks Canada for public review.  Here is a map which I obtained from the Final Consultation Report, prepared by Terriplan Consultants (interestingly Parks Canada now seems to have removed all web pages showing anything other than the final plan)  showing the Option 1 boundaries that create a park 6, 450 km2 in size.  It has a couple of little holes within it, but is otherwise a contiguous area that does what is intended.  This park would have fully enclosed the Nahanni headwaters.  It had the support of 94% of people who participated in the review, including the Sahtu First Nation and environmental scientists who were familiar with the fauna of the region.  It is also a logical extension of Nahanni National Park.

The second map (also from Terriplan) is for Option #3, the smallest of the three offered, and the one that was eventually chosen by the government.  It looks a bit like a park that has suffered some sort of fungal disease that has nibbled bits out for no apparent reason.  One belt of excluded land turns a single area into a larger and a much smaller, arch-shaped after-thought to the southwest, and a deep carved out crater in the middle of the larger section turns it into a U-shape, with the headwaters of the South Nahanni in the unprotected excluded area. 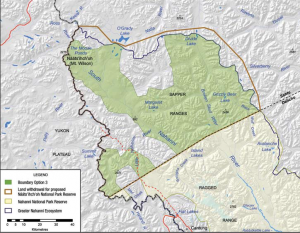 Despite recommendations from UNESCO in 1978 and again in 2006 to protect this watershed, despite enthusiastic support from people in the region including the First Nation whose land it occupies, and despite the fact that 94% of respondents preferred the far better Option #1, the fact that some minerals worth mining might become off limits led the government to make its decision.

Does Canada not have enough land and coastal seas covering mineable minerals that this park could have been created with environmentally logical boundaries?  Does our government listen only to the multinational mining industry when it makes decisions?  Oh yes, back to the announcement by Prime Minister Harper concerning the Canadian High Arctic Research Station – I said that the press release listed “environmental stewardship and climate change” among the priorities for the station.  The Number One Priority was… you guessed it …”resource development”.

If Stephen Harper took more time to actually learn about the Arctic, and spent less time listening to the advice from his multinational mining corporation minders, perhaps he would understand that we do not have to arrange to dig up every square meter of Canada and sell it off to China, or whomever the highest bidder may be.  And he might also gradually come to understand that this climate change thing is far more important to Canadians’ futures because of things that will happen to our environment and our way of life than it ever will be because it makes it possible for multinational mining corporations to wander about digging holes and making money for their largely foreign shareholders.

Meanwhile south of the border, the U.S. election campaign is well under way.  The Republican National Convention began with a slight hitch, getting its agenda compressed a day because of a hurricane that ended up dumping on New Orleans instead.  Did Mitt Romney comment about climate change?  Yes, but only to mis-quote Barack Obama who had talked several years ago about slowing down rising sea level by getting serious about CO2 emissions.  Otherwise, his agenda seems to be remarkably like Harper’s.  He is going to free corporations from government regulations that “slow down innovation”, he’s going to let the States manage mining on federal lands because they grant approvals to mine more swiftly.  He’s going to open up every available piece of land or territorial sea to mining, all in the name of “oil independence”.

Next week it’s the Democrats turn.  Much as I’d like to believe that Obama might come out fighting for the environment, and against unbridled growth in fossil fuel mining, I know he cannot do that in a tight race.  I just have to hope he knows what the issues are, and, after the election, will be able to act responsibly.  As for Harper and Romney, the sad thing is to recognize that either these two simply cannot understand the mess we are getting ourselves into, or more likely, they understand all too well, but have made calculated decisions to ignore the problem because it’s easier and far more rewarding to keep mining corporations happy

One Response to Environmental Crisis? Not for Our Political Leaders