Canada’s annual report on GHG emissions was finally released by Environment Canada late in October, several months later than it should have been.  The release was low-key, and almost certainly timed by our wily Prime Minister Harper to occur while the media’s attention was focused elsewhere.  (A tiny benefit for him from the current scandalous antics in our Senate.)  There is good reason for this government to downplay this report.  In fact, the less said about it the better.  But I do not work on behalf of the Harper government…

In an informative evaluation, the Pembina Institute says of the report:

“Canada’s Emissions Trends is an indispensable report from Environment Canada and a welcome example of government transparency.  Carefully put together by a top-notch team of analysts, the report lays out Environment Canada’s best guess about the future path of Canada’s greenhouse gas emissions under current policy.  It tells us where our emissions are headed in each sector and in each province, as well as nationally, and allows us to compare this to a hypothetical scenario in which no action was taken”.

The Pembina article also refers to the document as ‘credible’ and ‘publicly accessible’  In short, the series of annual emissions reports are a good example of what Canada’s government should be telling its people, and the world, about our performance on GHG emissions.  Unfortunately, the story it tells is one that should concern any Canadian who cares about environmental responsibility, and anybody, anywhere, who is interested in whether Keystone XL, Northern Gateway, or various other pipelines should be built or not.  Canada is not only failing to perform as it should; Canada’s performance on curbing GHG emissions is getting worse.

Notable in the 2013 report is the complete absence of any mention of Canada being “halfway towards meeting its goal for 2020 under the Copenhagen Accord”.  This phrase had been a favorite of the former Minister of Environment, Peter Kent, and has been uttered more than once by Mr. Harper and by other Cabinet officials as well, despite being palpably untrue in any but the most convoluted and distorted way.  The current Environment Minister, Leona Aglukkaq, has been notably silent on the report, but has stated recently that “Our government is taking action to address climate change.”  True of course, but how much action, and is it enough action?  Why should she worry – nobody else in Cabinet seems worried either. 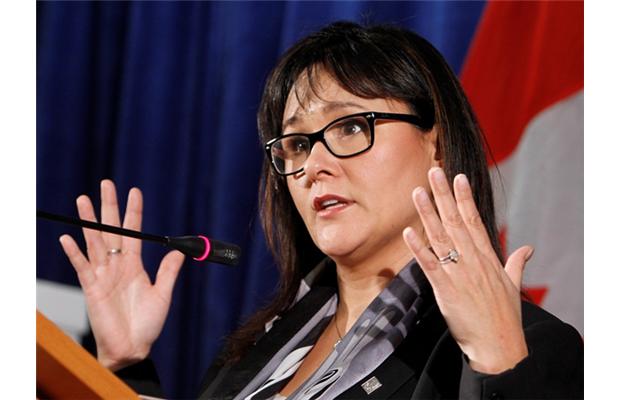 The 2013 report spares us the convoluted graph that featured in 2012 and was used to argue the ‘being halfway there’ case.  Instead, the 2013 report offers a figure that projects emissions rising from now until 2020 and does not even indicate the Copenhagen target of 612 tonnes CO2 per year.  The text explaining this figure points out how difficult it is to project future emissions, given their sensitivity to level of economic activity and other factors, and again does not mention the Copenhagen target.  The figure suggests we won’t come anywhere near that target even in a slow-growth world of economic collapse! 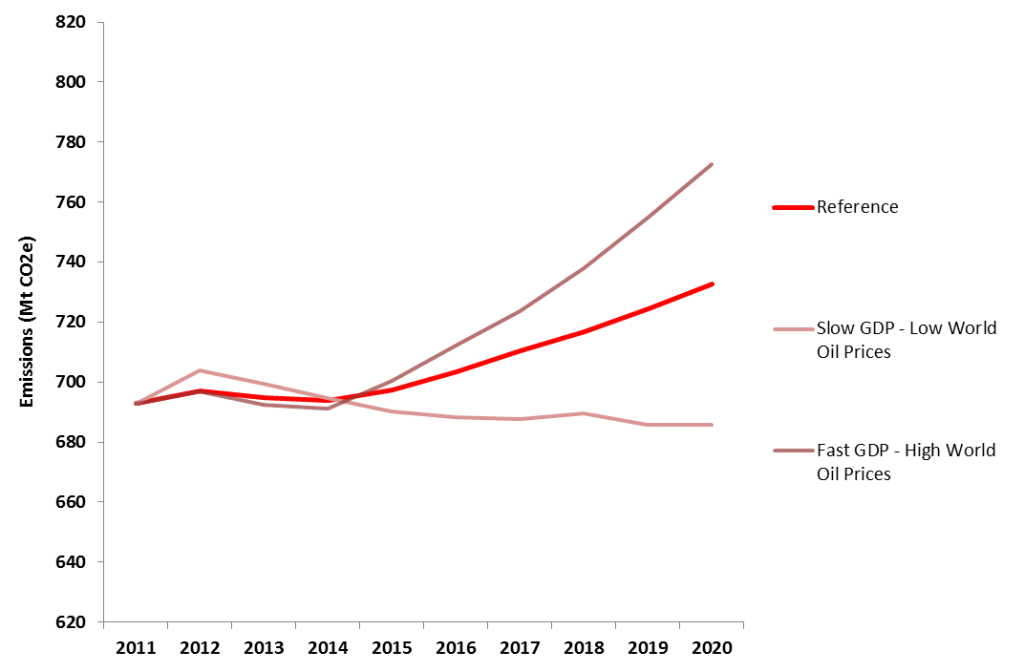 Figure 5 from emissions report showing the trend in emissions to 2020 under various economic assumptions.  The Copenhagen target cannot be shown because it is far below the
bottom of the graph at 612 tonnes.

The earlier (2012) graph is more or less reproduced in the Summary of the 2013 report, but without the claim of being halfway to the goal (and never mentioned in the body of the report).  The Summary text also fails to note that the projected rate of emissions in 2020 is 14 tonnes worse (734 vs 720 tonnes) than it was a year ago.

Perhaps the most revealing figure in the 2013 report is the one that shows our utter lack of progress most convincingly.  The columns in the figure stand there like four enormous purple barrels of tar sands crude, and the 2020 barrel is the largest of all.

Figure 3 from emissions report, showing GHG emissions 2005 to 2020 as
megatonnes CO2 equivalent.  Canada’s utter lack of progress stands there
in all its purple glory.

Why is Canada’s performance so bad, and more particularly, why has it actually gotten worse?  One revealing comment in the report points to the fact that the energy intensity of tar sands oil extraction is now greater, not less, than it was a few years ago.  Lower grade bitumen, and deeper deposits are now being mined using steam-assisted gravity drainage (SAGD) techniques at a higher energy cost than was the case in the past.  As a result, the energy intensity which had been falling has plateaued and started to rise again.  Added to the failure to further reduce energy intensity is the fact that tar sands oil now constitutes a much greater proportion of Canada’s overall oil and gas production.  The oil and gas production sector is now second only to transportation in use of energy, and is projected to emit an extra 37 million tonnes CO2 in 2020 than it does today, the overwhelmingly largest increase of any sector of the Canadian economy because production is being ramped up as fast as the pipelines can be built to send it all off to market.

The performance reported in Canada’s Emissions Trends is being roundly criticized by environmental NGOs and by the mainstream media.  Geoffrey Simpson, writing in the Globe and Mail, states flatly that our Copenhagen commitment will not be met.  And yet the Harper government continues to advocate strenuously for any action that will allow the tar sands adventure to expand as rapidly as possible.  Northern Gateway, which some optimists had begun to think was dead in the water, has started to show signs of new life.  With the provincial election well behind her, the Premier of British Columbia is now talking nice with the Premier of Alberta, in signs that the BC government can be bought off with promises of new tax and fee revenue for bitumen that flows (in very safe pipelines) over its iconic landscape to the coast.  I hope the people of British Columbia are not so easily bought because it is clear that the thirst by the few for tar sands profits is not easily sated, and politicians of most persuasions are among the thirsty few.

And this brings me to the growing environment and economic risk.  Carol Linnett, writing in DeSmog Canada last week, drew attention to the global cumulative total carbon emissions identified by the IPCC in its recent report as the total amount of CO2, or equivalents in other GHGs, that can be released into the atmosphere for a given increase in global temperature.  She quoted a value of 921 gigatonnes (921 billion tonnes) of carbon as compatible with a maximum temperature increase of 2oC (the Copenhagen target).  The actual number compatible with 2oC is closer to 800 gigatonnes carbon, because there are other factors adding to global temperature increase, but her main point is still correct:  Over half this total amount has already been released to the atmosphere (about 531 gigatonnes by 2011), leaving somewhere around 270 gigatonnes that can be added without pushing temperature increases beyond 2oC.  Those 270 ‘available’ gigatonnes will be shared among all countries, and Canada will be permitted to emit its ‘share’. 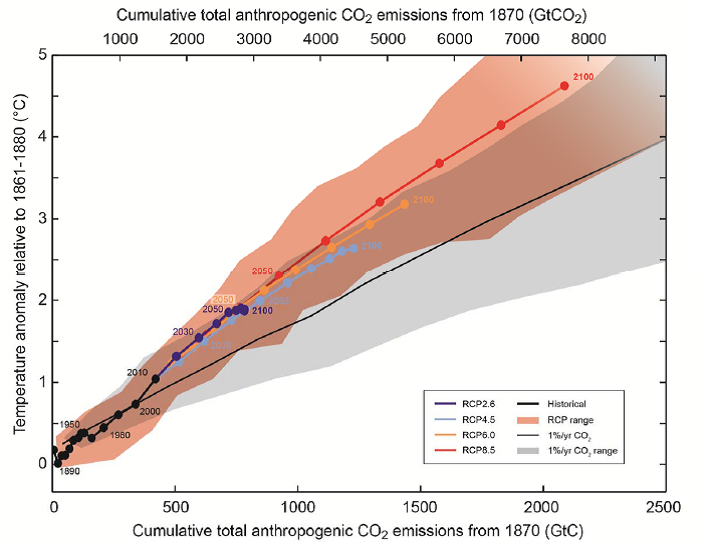 Figure SPM 10, from the Summary for Policymakers of the WG! Report for the 5th Assessment by IPCC, published, September 2013, showing the way in which the total anthropogenic emissions of GHGs relate to a specific amount of global warming.  For a maximum warming of 2oC, it is necessary to keep total emissions below about 800 gigatonnes Carbon.  Download the report here.

What might Canada’s share be?  Maybe 4 gigatonnes, given the size of our population?  Maybe 24 gigatonnes, given the size of our economy?  Maybe 30 gigatonnes because we are really nice people?  But Canada’s proven reserves of gas and oil add up to 91 gigatonnes carbon, and adding in our probable reserves brings the total to 174 gigatonnes.  No matter what Stephen Harper, his heirs and successors, or the multinationals that ‘own’ those reserves, want,  Canada is not going to be permitted to dig up all these reserves and send them to market.  If we are limited to 4 gigatonnes carbon, we have just 20 years at our current rate of emissions (702 megatonnes CO2 = 702 x 0.2727 = 191 megatonnes Carbon per year).

So, what is the future going to bring?  Once a sufficient majority recognizes that it would be foolhardy to exceed the 2oC limit (many already recognize this is too much warming), constraints will be imposed, whether the successor to the Harper government likes it or not.  They will be imposed by treaty, by force, or by the markets.  And, guess what?  Expensive to produce, difficult to refine, tar sands oil will suddenly cease to have value.  That’s a real tipping point – when the shares in oil sands ventures plummet like so many Blackberries hitting the ground.  And then what?  No more easy money for Canadian governments used to royalties and taxes, a severe hit to an economy overly focused on extracting and selling raw materials, and a most awful environmental disaster in Alberta.  Because if you think the tar sands are an environmental disaster, just wait until the mining corporations disappear into insolvency leaving untended tailings ponds and other environmental problems behind them. 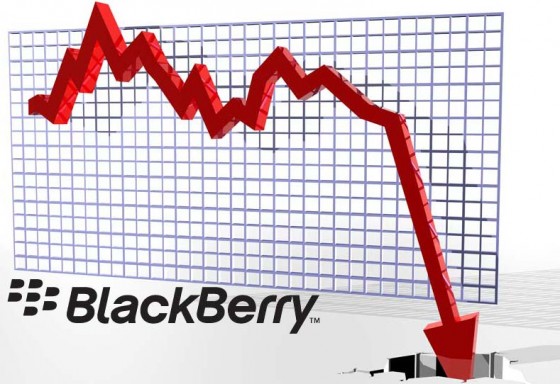 When something loses value in the marketplace, it tends to lose it quickly, even though its intrinsic value is completely unchanged.  Tar sands oil could lose its value overnight once the
decision to curtail use of fossil fuels is made

As for building pipelines to ship oil that is not going to be taken out of the ground…. Would it not be more wise to reshape our economy before this tipping point is reached.  Maybe we could build an economy that used our natural resources sustainably to foster ecological efficiency and a healthy environment in which humans and other organisms might live?  Now there’s an idea worth thinking about.  One we should have been thinking about these last few years, instead of fixating on dirty, but oh so ethical, oil.