On September 25th, I discussed the recent publication in Science by Dr. Solomon Hsiang and colleagues reporting direct causal effects of climate change on levels of human aggression in society, and I noted the growing range of types of evidence that the changes we are causing are having many, varied and ramifying effects on our lives.  As a coral reef ecologist, I have to say, as clearly as I can,

“This is not about the coral reefs or the polar bears or even the Amazon forest,
it is about us, our lives and our future on this planet.”
(And I’ll come back to this little aside at the end.)

Commitment to climate change is an initially misleading term – it sounds like a reference to an intention to create climate change or even a desire for climate change, but that is not what it means.  Yes, the behavior of some fossil fuel corporations and some governments might look a lot like decisions to create climate change have been made.  Our current Canadian government seems to have a goal of ensuring that any and all resource extraction activities must proceed as rapidly as possible, and the environment be damned, but I suspect if pressed, they would deny this is their goal.  (Of course, pressing our government leaders for answers on anything substantive is a frustrating task that seems to result only in ducking, dissembling, or high dudgeon, amid efforts to change the topic.)

Is this a sign that Canada is committed to climate change?  Not really.
Image © Canadian Liberation Front

No, commitment here does not imply any intention to produce climate change.  It refers instead to the future changes that are absolutely going to happen because of actions we have already taken.  It refers to climate change we cannot avoid.  And I think it certainly worthwhile to broaden the term to refer to commitment to global change, recognizing that the changing climate, plus some ancillary changes we are causing are radically altering our planet.  You see, the Earth is a complicated place, and processes that take place here are complex and can take time.  A simple example is the committed climate warming that will occur.  By adding CO2 to the atmosphere, we have not warmed the planet, only improved its insulation.  CO2 and other greenhouse gases impede the rate at which heat energy can leave the Earth; increasing their concentration in the atmosphere is like adding an extra blanket on the bed on a cold winter evening.  Greenhouse gases do not directly warm the Earth, but over time, the slower rate of loss of heat causes the planet to warm up.  And those two words, ‘over time’, lead us to committed warming.  We have already added CO2 to the atmosphere, which has added to the insulating capacity of the atmosphere, and this added insulation is now leading to a period of warming that will extend at least to 2100.  If we were to have stopped all CO2 emissions at the start of this century, average global temperature would rise about 0.6oC by 2100, from average temperature during 1980-1999, slightly less than the 0.8oC that had occurred between the start of the industrial revolution and 1980-1999.  That 0.6oC rise is our committed warming (its slightly more than 0.6oC now, because we have continued adding CO2 during 2000-2013).

Just as we are committed to warming, we are committed to other aspects of climate change, although each aspect has a different duration over which the commitment will be expressed because the lag times vary in different parts of the global climate system.  Thus, our commitment to sea level rise is going to occur over a period of at least 1000 years, because it will take that long for the processes involved, such as glacial melting, to reach a new equilibrium.  While we have seen only about 0.19 m of sea level rise between 1900 and 2010, and will see only about 0.53 – 0.97 m more between now and 2100 under business as usual, sea level is not going to stop rising in 2100.  As the IPCC’s 5th Assessment reports, understanding of the factors promoting sea level rise is not yet robust so there is less precision around estimates of commitment.  Still, sea level was about 20 m higher than today during the mid-Pliocene, and 5 to 10 m higher than today during the last Pleistocene interglacial; both these times were comparable in temperature to what we expect during the late 21st century, so there are clearly several meters of sea level rise already committed that will develop between 2100 and 22 or 2300.

The fact is that when we try to project likely future conditions on the planet, and are confronted by higher temperatures, greater risk of flood or drought, higher sea levels, larger populations, greater demand for food and water, we need to recognize that with the best will in the world and even a magic wand or two to help us take draconian steps immediately, there are many aspects of that future that cannot be avoided.  We are already committed to them.  Just as the individual who has already stepped off the window ledge has little opportunity to avoid hitting the ground (unless he is Tom Cruise), we have already created some very serious problems for 2050 or 2100 – problems that we cannot avoid by changing our behavior starting today. 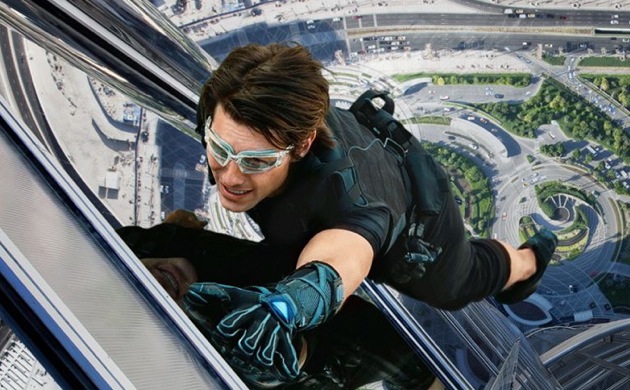 Tom Cruise on the Burj Khalifa, Dubai – definitely a mission impossible, but unlike most of us, he is not already committed to fall to the ground.  Image © Mission Impossible: Ghost Protocol

So, what is my message here.  That it is high time that we stopped standing around like deer in the headlights, and recognized that we have serious problems approaching and had better get busy to prepare to deal with them.

Which brings me to a recent article in Nature by Camilo Mora and colleagues at University of Hawaii.  On 10th October, Mora and his colleagues reported the results of a series of modeling studies in which they sought to discover not what the world might be like in 2050 or 2099, but rather, in what year different places on Earth would depart forever from the way they had been before.  They asked, for example, for each spot on the Earth’s surface, when annual mean temperature would forever exceed the highest annual mean temperature recorded during the period 1860 to 2005.  By looking at things in this novel way, they hoped to highlight 1) the extent of changes that are taking place, and 2) the variation among locations in patterns of change.  A fresh way of looking at the data can often reveal new insights.

To be specific, Mora and his team evaluated seven climate variables — near-surface air temperature, sea surface temperature, precipitation, evaporation, transpiration, surface sensible heat flux, and ocean surface pH.  They used results from 39 different climate models, relying on results averaged across models as the best estimate of the likely future.  And they considered two main greenhouse gas emissions profiles for the future: RCP 8.5, which is the good old business as usual model (that’s the one where Canadians get out of the way and let the multinational corporations dig up and export the tar sands just as fast as they possibly can), and RCP 4.5 which models emissions restrictions that would keep CO2 concentrations in the atmosphere to 450ppm, and limit temperature increase this century to 2oC.  Their paper focused on the results for mean annual temperature.

The results are interesting.  Tropical regions break out from the historical patterns for temperature earlier, largely because tropical regions experience narrower temperature ranges during the year and less absolute temperature change from year to year.  As Mora and colleagues point out, tropical organisms, adapted to a relatively narrow temperature range may be far more susceptible to modest temperature increases that would temperate species used to more variable climates.  Reef corals are a prime example suggesting they may be correct – mass bleachings have occurred when the temperature exceeds the long-term summer average by only a couple of degrees.

Data on temperature.  The most important image is (a) at upper left, which shows the year (as a color) in which the annual mean temperature permanently exceeds the temperature range for 1860 to 2005 under business as usual.  Most of the tropics reach this threshold between 2030 and 2050.  Panel (b) is the same result for monthly means while panel (c) reports the actual temperature change at the time when the long-term temperature range is first exceeded.
Image © Mora et al., Nature, 502: 183-187

Not content to just produce a map, Mora and colleagues go on to look at implications.  While they do not develop the ideas, they note that most of the places on the globe that will be first to see ‘unprecedented’ climates are in developing countries – those least able to cope with the demands an altered climate will bring.  They also note that most of the world’s biodiversity hot spots – those special areas of particularly high biodiversity that many conservation scientists argue must receive particular attention if we are to stem biodiversity loss – lie smack in the middle of regions that will experience unprecedented climates first.  If it does nothing more this article should reinvigorate some debates.

And, finally, back to my comment about this not having much to do with the corals, polar bears or rain forests.  As a scientist, I can observe, learn from, and even anticipate likely changes that will occur in my special coral reef environments.  After all, after a lifetime, I should know a little bit about these places and how their organisms are likely to respond.  But as a scientist, I also know that Nature makes no value judgements.  A diverse, highly productive coral reef which provides bountiful fish to coastal peoples, wonderful experiences to myriads of tourists, intriguing questions for coral reef scientists, and the wondrously intricate network of patterns and processes embedded in its ecosystem that keep spellbound those who understand, and provide the tales that illuminate our science… that coral reef is no more valued by Nature than the slime-covered mass of rubble that it can become if neglected, abused, or surrounded by a warming and acidifying ocean.  It is we who make the value judgements in this world.  Or at least, it is we who make the value judgements that we choose to accept.  A microbe capable of making value judgements might see the world quite differently.

Ove Hoegh-Guldberg and colleagues wanted to impress on readers the likely consequences for reefs of climate change.  We intuitively value (A) more than (B) more than (C).  But Nature does not make any such distinctions.  Image © Hoegh-Guldberg et al, Science, 2007.

Why we value biodiversity, why we value complexity, why we value the abundance of macroscopic animal life that is so characteristic of a rich coral reef, may be partly because we do seem to have an affinity for life.  But it is probably largely because such places provide us with food and sustenance, with medicines and building materials, with beauty (whatever that really is), and with those other things that go to make for a quality life for us.  As a scientist, I should be able to look on the likely disappearance of coral reefs this century as an interesting phenomenon, one that has happened before for other reasons.  As a human, and particularly as a human who knows that we are the cause of global coral reef decline, I have great trouble maintaining that cold scientific objectivity.  And I will continue to maintain that we are morally corrupt if we knowingly let this happen.  Along the way, I will also make the argument that our own future is going to be immeasurably more difficult if we do not change our ways. 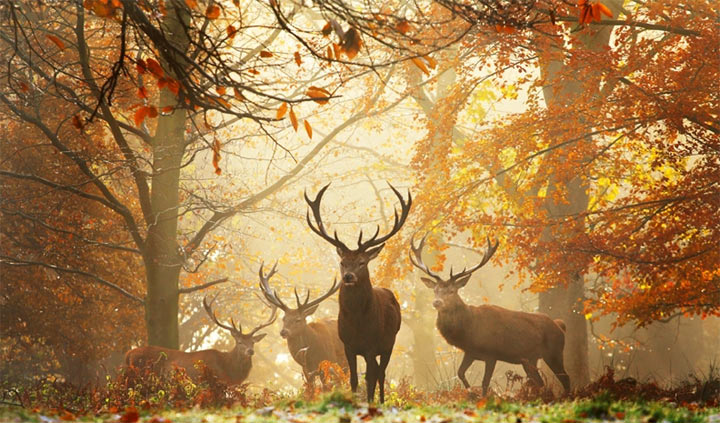 We do not own this planet, any more than they do, and I do not believe we have the right
to destroy it knowingly.  Image © Alex Saberi

Posted under Changing Oceans,Climate change
Comments Off on More on Our Commitment to Global Environmental Change and its Impacts on Us