You can tell it is mid-August.  There is a hint of crispness in the air.  Canada’s glorious summer is winding down.  We can anticipate maybe a quarter year of glorious weather before we are reminded once again of the Pleistocene.  And today, Stephen Harper headed off to Whitehorse to begin his annual northern adventure vacation.  How come he gets an annual adventure vacation at government expense while the rest of us have to raid our piggy-banks?  Because it really is a vacation – he floats off into a Neverland of wide open spaces, occasional polar bears, Inuit stories, far removed from Ottawa, Senate scandals, and the need to appear to govern.  Of course his Arctic tour will be punctuated by brief daily photo-ops in which the press get to take his picture in front of some imposing vista while he spouts the Message of the Day – that is the justification for having the rest of us pay for his vacation. 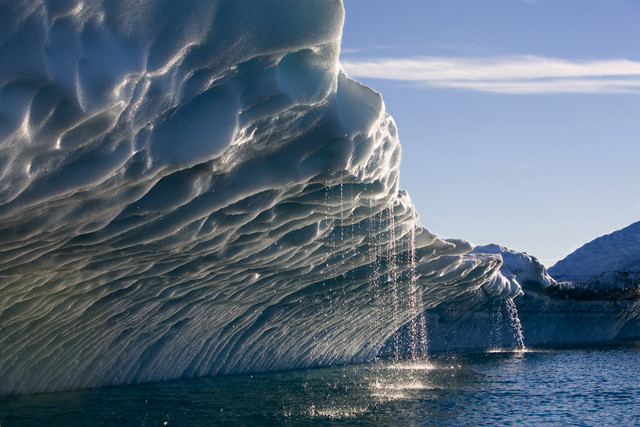 The Arctic is melting, but will Stephen Harper notice?  Image © Paul Souders/Corbis

I keep hoping that Mr. Harper will learn from his Arctic tours, that maybe he will start to see that the Arctic is changing rapidly, and not necessarily in good ways.  But so far he seems immune to the educational opportunities travel can bring.  Maybe this year will be different.  Maybe he will become sensitized to the growing risk of methane releases from thawing permafrost or melting of marine clathrates.  Maybe he will come to understand that the rapid reductions in sea ice, and the profound environmental changes that are resulting, are due to human activities.  Maybe he will pause from enthusing about the ‘opening up’ of the Arctic just long enough to realize that sometimes change can be difficult or even worse.  Maybe he will come to see that development of the Arctic needs to proceed with consummate care given the extent of environmental change already underway.  Maybe he will finally recognize that there are people who live in the Arctic, who would welcome some greater opportunities than they now have, but who also want to be able to continue to live there.

To talk about opening up the Arctic to development is to speak as if the north of Canada has been stored away in a freezer, Inuit carvers, polar bears and all, while we wait for an opportune time to open it like some glorious national Christmas present to be used and enjoyed, and discarded.  It is to talk from the perspective of an outsider, someone who sees the Arctic as a treasure chest waiting to be raided to enrich, but not really to enrich those who have lived there, those who belong there, those who are of the Arctic.  Wouldn’t it be wonderful if Stephen Harper finally stopped talking this way? 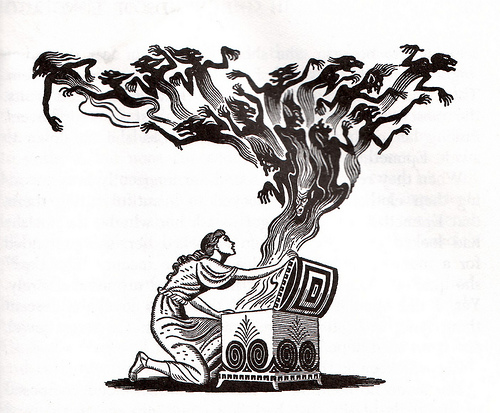 If opened the way Harper seems to want to, the Arctic could be a treasure chest for some plunderers, and Pandora’s Box for the rest of us

During this week of Harper’s Arctic tour, I think the rest of us should be reflecting on Canada’s overall environmental record, and ask one simple question:  does Canada’s Harper government have any ideas for creating jobs and raising standards of living that do not involve the plundering of our environment for mineral wealth?  I fear we are being governed by a one-trick pony, and the damage it is causing will be with us for many decades into the future.  Which brings me inevitably to the tar sands, and to Keystone XL and other pipelines. 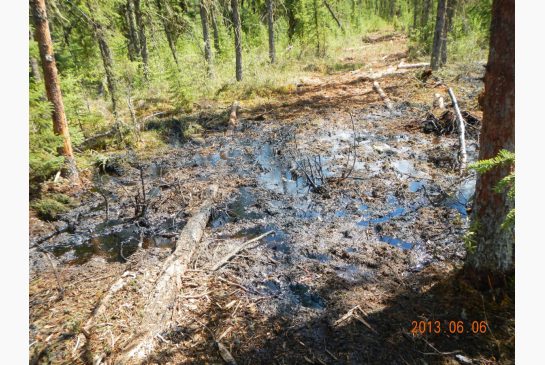 Oil seeping at Cold Lake, Alberta.  Canadian National Resources Ltd has been unable to stop the leaks from its in situ tar sands operation.  Photo from The Star/Emma Pullman

Anyone who has followed this blog, or read my book, will know my views on Canada’s tar sands industry.  It’s heartening to see the growing evidence supporting the view which says we have got to curb the growth of, and move towards shutting down tar sands exploitation long before we run out of tar sands to mine.  On August 14th, Environmental Defense Canada released a 10-page, fact-filled document called “Mitigating climate impacts of the tar sands, Political and policy barriers to greenhouse gas reduction in Canada”.  It includes detailed references for each of the claims made, and is worth a careful read.  The tar sands industry is the fastest growing source of greenhouse gas (GHG) emissions in Canada, and if the industry grows as planned, it will cancel out all other efforts now in place or planned across the country to reduce GHG emissions.  Tar sands emissions grew 250% between 1990 and 2010, and industry expansion plans, warmly endorsed by the Harper government, will see them double between 2010 and 2020.  The eventual plan is for a tripling of production by 2030.  The Environmental Defense report states that production of tar sands oil (from well to the point where it is ready to use for fuel) releases 81% more carbon than does conventional oil.  Even if you consider the entire life cycle (from well to burning for energy) the tar sands product emits 17% more carbon as GHG.  It is the most dirty oil out there, and at a time when we should be looking for ways to reduce GHG emissions, we should not condone the aggressive expansion of production of this particular form of oil.  Never mind that large parts of Alberta seep in it.  Leaving minerals in the ground is sometimes a good thing to do.

Environmental Defense documents the fact that Keystone XL (along with Northern Gateway, and the newly proposed trans-Canada line to the Maritimes), is an essential part of the plan to expand tar sands production.  If completed, Keystone will transport 830,000 barrels of tar sands product per day to Texas.  That production once refined and used equates to between 18.7 and 24.3 million additional tonnes of GHG emissions than if the US used an equivalent quantity of conventional oil.  And if the US continues its aggressive switch from oil to gas, the differential would be even greater.

The extent to which the industry intends to expand tar sands production is mind-blowing.  According to the Environmental Defense report, “Industry plans to increase Canadian heavy tar sands production from 1.4 million bpd in 2012 to 5.8 million bpd in 2030.  Beyond its 2030 plans to triple production, industry has proposed a long-term goal of 9.4 million bpd of tar sands bitumen production.  The impacts of this pace and scale of development would not only be catastrophic for the climate, but also lead to immeasurable damage to local ecosystems, water, air and communities”.  Given the Harper government’s enthusiastic support for expansion, it is clear that one effective way of at least slowing this run-away train is to not let these pipelines be built.

The Environmental Defense report also documents the Harper government’s failure to regulate tar sands operations, while noting the millions of dollars being spent by both the Harper and the Alberta governments on public relations campaigns that claim responsible management and call any opposition to the tar sands industry criminal, un-Canadian, or terrorism.  As I have reported many times before, Canada is failing dismally with respect to its voluntarily announced commitment to cut GHG emissions by 2020, the Harper government continues to promise, but has introduced no effective limits on tar sands emissions, and has progressively weakened environmental regulations in ways that serve the tar sands industry’s needs. 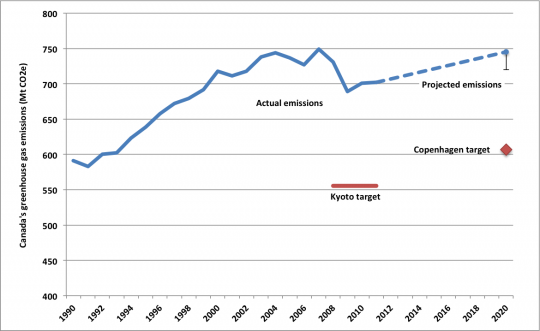 The 2013 Climate Change Performance Index was released by Germanwatch and the Climate Action Network Europe in November 2012.  Using data for the top 58 GHG emitter nations, the CCPI is released annually to increase transparency in the climate change debate.  It evaluates performance using several criteria such as emissions levels, trends in these, use of renewables, policy etc.  The 58 countries together produce 90% of all GHG emissions.

The 2013 issue, based on 2010 data, includes the following in its Key Results:  “Canada still shows no intentions to move forward on climate policy and thereby leave its place as the worst performer of all western countries”.  At 58th Canada ranks above Kazakhstan, Iran, and Saudi Arabia (note that the authors refuse to assign ranks 1, 2, or 3 because even the best performer (Denmark) needs to improve).  The US ranks 43rd and Australia (with a resource-based economy like Canada’s) ranks 40th.  Both are improving while Canada is falling behind. 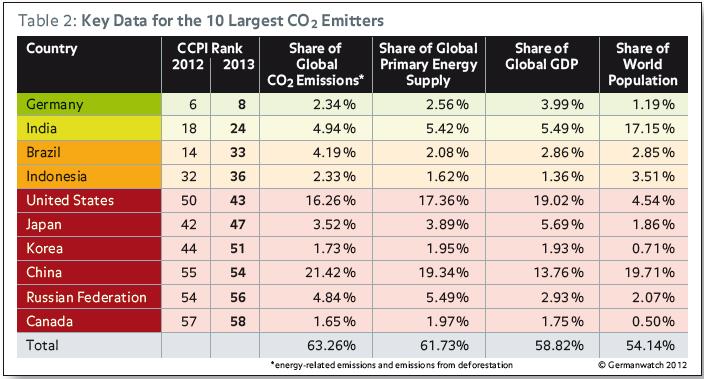 The 2013 CCPI data for the 10 largest emitters shows Canada right at the bottom.  The share of global emissions if expressed per capita is only fractionally behind that for the USA and well ahead of every other country in this table.  (Table from 2013 CCPI report).

These facts about Canada’s performance with respect to GHG emissions are very different to the soothing half-truths that our Harper government continues to present to us. Canada is failing badly, failing worse than any of those countries most comparable to us.  We are performing worse each year rather than better.  And the Harper government’s enthusiastic support for expansion of the tar sands industry is absolutely at variance with correcting course and bringing our emissions down.  We have to make a choice, and so far the Harper government is making the wrong one, whilst lying through its collective teeth about how we are doing.

In a faintly ironic twist, the West Coast Environmental Law Association last week formally asked the Commission for Environmental Cooperation to take a hard look at Canada’s environmental performance.  Their argument is that by reducing requirements on industry to act responsibly with respect to environment, the Harper government has been giving Canadian industry an unfair advantage viz US and Mexican companies under NAFTA.  I’m not sure this protest will gain any traction, but it is a creative new way to draw attention to the gutting of environmental regulations that has been going on to favor the tar sands (and other mining) industry, and it should attract some attention south of the border where the ultimate decision on Keystone XL will be made.

Speaking of weakening environmental policy… remember how the Harper government closed down the National Round Table on the Environment and the Economy last year – closing it down so forcibly that it was not permitted to archive its website so the accumulated data could continue to be accessible.  Well, reporter Mike De Sousa has just reported on an internal briefing paper prepared for then Environment Minister Peter Kent in April 2012.  Among the justifications for shutting down the roundtable was the observation that a number of non-governmental organizations, think tanks and university faculty were doing significant environmental policy analysis and research.  Among the organizations named:  Nature Canada, David Suzuki Foundation, Green Budget Coalition, Canadian Parks and Wilderness Society, Environmental Defense, Pembina Institute, Simon Fraser University Centre for Public Policy Research, Conference Board of Canada, and so on.  Funny – these are the very same organizations that the government was bashing as un-Canadian, radical, foreign-funded groups out to wreck the Canadian economy.  Significant analysis and research, but since the recommendations do not fit with expansion of our mining industry, let us just declare these organizations un-Canadian.

I started in the Arctic and will end there.  It will be fun to watch Mr. Harper’s progress this coming week.  Let’s see if he manages a tiny nod towards environmental sustainability anywhere along the way.  Or shows any recognition that the real world of the Arctic is not the Neverland vacation destination of his dreams. 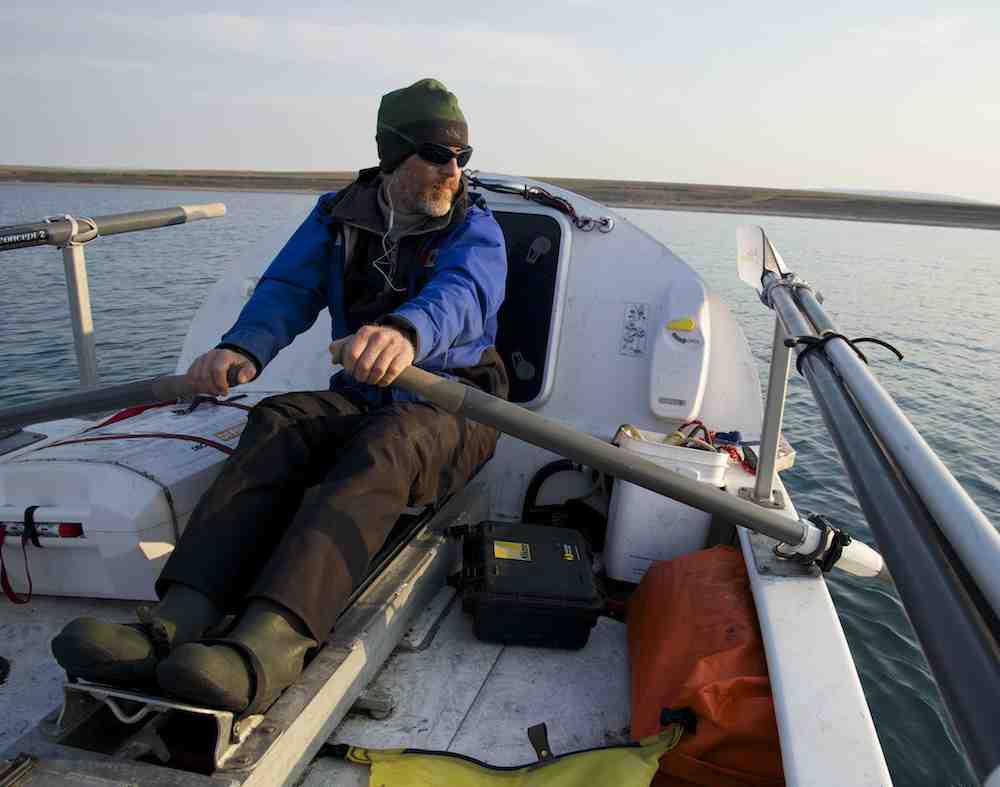 At least the mainstreamlastfirst guys (this is Kevin on 11th August) are trying to learn about the Arctic while rowing the Northwest Passage.  Not planning to dig it up as soon as the frost is out of the ground.  Photo © mainstream last first