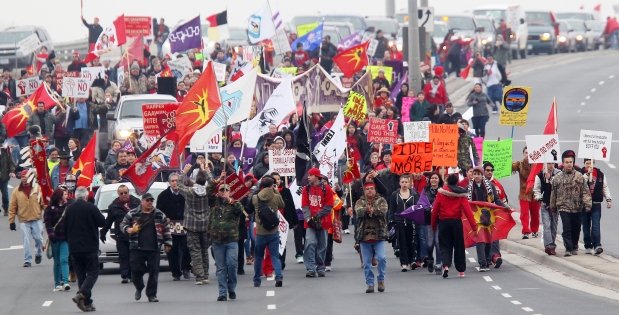 They spring up suddenly, like mushrooms after a rain, with drums, banners, flags.  So far, they have been responsible, respectful of others, optimistic and welcoming.  It is wonderful to see citizens appealing for recognition in this way, even if it is distressing that the appeals have to be made.  But, what does this all have to do with me?  As Idle No More stages round dances, demonstrations, and occasional blockades across Canada, non-aboriginal Canadians have to come to terms with this new movement.  What is Idle No More?  Does it speak to me?  Does it speak for me?  Should I be supporting, or joining in?  The messages from Idle No More are more clear than those from the Occupy movement, but almost as chaotic.  They speak to First Nations sovereignty, to rights long denied, to concern for our shared environment, to treaties not fulfilled.  I think there is much to support here, especially the concerns for environment.

Let’s not be seduced by the myth that First Nations people are always good stewards of the land; that they, unlike us colonialists, never overfish, overhunt, or destroy natural systems.  But let us recognize that within First Nations there are cultural ties to the land that are a lot stronger and more specific than those of many colonialists.  The stated desire of First Nations leaders that they wish to be consulted by the Government of Canada on matters concerning the use of natural resources are not entirely based on greed or a sense of entitlement.  In fact, the idea that the citizens of a country should have a say 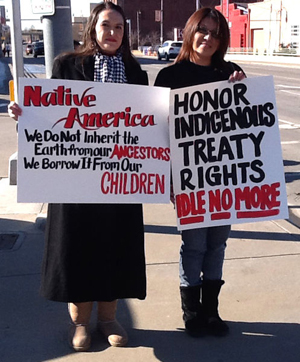 An Idle No More protest in Oklahoma City – clearly stated environmental sentiments. Photo from The Tyee

concerning the uses made of the land and its riches is not an idea that should be reserved to First Nations.  It is a fully appropriate demand for all of us, because to the extent that any human actually owns any part of this planet, a nation’s citizens hold collective ownership in its natural wealth.  Natural resources are a part of the patrimony of every Canadian citizen.  Which naturally, and unfortunately, brings me again to the tar sands of Alberta.

Last week, Greenpeace used access to information laws to obtain a copy of a letter from the Energy Framework Initiative (EFI) that had been sent to Peter Kent, Minister of Environment, and Joe Oliver, Natural Resources Minister, on 12th December 2011.  EFI is a partnership among the Canadian Association of Petroleum Producers, the Canadian Energy Pipeline Association, the Canadian Petroleum Products Institute, and the Canadian Gas Association.  In their letter, signed by the presidents of the four organizations, EFI respectfully set out its argument that regulatory reforms were needed to ensure economic growth and job creation.  The letter explicitly identifies the “National Energy Board Act (NEB Act), Canadian Environmental Assessment Act (CEAA), Species at Risk Act (SARA), Fisheries Act, Migratory Birds Convention Act (MBCA), Navigable Waters Protection Act (NWPA) and others”, and notes that a recent “Parliamentary Review of CEAA has provided an opportunity to set the scene for a broader review of environmental legislation and regulation as a system”.

Image of tar sands development from Canadianliberationfront site on Facebook.

At the heart of the letter is the outlandish claim that the basic approach in existing legislation is out-dated because it is based on a philosophy of prohibiting harm.  In the view of EFI, environmental legislation is “almost entirely focused on preventing bad things from happening rather than enabling responsible outcomes”.  Apparently, the idea that some individuals or corporations might not always behave responsibly is foreign to these fine men.  The full text of the letter is here.

Greenpeace shared the letter with CBC, which broadcast a news item on 9th January 2013, pointing out 1) that less than a month after the letter was written, Minister Oliver published an open letter accusing environmentalists and other “radical groups” of undermining the Canadian economy, 2) that in April 2012, in its first omnibus budget bill, the government completely rewrote CEAA and made substantive changes to NEB Act and the Fisheries Act, and 3) that in October, in its second omnibus bill the government replaced the NWPA.  A review of SARA is under way.

According to CBC, a spokesman for Oliver admitted that the Minister does meet with a variety of energy industry stakeholders, while industry representatives stated that they “regularly talk with the government on subjects related to their field”.  Said Dave Collyer, president of CAPP, “That’s one letter. It’s one element of a very long engagement process we’ve had with government, as others have had. Yes, we wanted changes because we think those changes enable economic activity and protect the environment at the same time.”   He is proud of his close relationship with our government.  Of course he is.  Like a proud owner of a pedigreed puppy.

Nothing in this story should surprise anybody, particularly when we reflect on the wealth and power of the multinational corporations behind EFI.  What should surprise and concern us is that, apart from the CBC and Huffington Post, the media ignored the letter and the story it told of how our government really does its business.  That our government denigrates environmentalists, threatens legal action, via Revenue Canada no less, against charitable organizations that dare to question environmental policy, and slavishly follows the bidding of its masters in the fossil fuel industry is disappointing, but also not surprising – the Harper government has a plan for Canada.  That is to do everything it can to encourage multinational corporations to dig up and export as much of our mineral wealth as they can, as rapidly as they can, providing predominantly less skilled jobs for Canadians, tax and royalty revenue for governments, and great wealth for the multinationals.  The goal is short-term prosperity, at great environmental cost, and with the loss of our national capital in the process.  Idle No More protesters complain that they want to be consulted on environmental matters.  I see lots of reason to join them in this complaint.  It’s time the Harper government learned on whose behalf they govern.

Lest you think I am being extreme, the Conference Board of Canada has just released its annual report card on environmental performance, once more confirming that the Harper government is being particularly irresponsible when it comes to environmental matters.  Canada ranked 15th overall among 17 OECD countries examined.  The fourteen categories assessed to judge performance, and Canada’s scores for each are here.

Table from Conference Board of Canada

France topped the list while only the USA and Australia fell below Canada.  Canada received D grades on 6 of the 14 criteria assessed and was the poorest performer on four of these – VOC emissions, Municipal waste generation, Marine trophic index, and Energy intensity (all criteria measured per capita).  Only Australia produced more nitrogen oxides and only Australia and the USA emitted more greenhouse gases.  Our record in the generation of municipal wastes, most of which ends up in landfills was particularly poor and has been deteriorating since 1990.  For three criteria for which Canada scored higher, it still ranked very low – 15th for change in forest cover, and 16th for water withdrawals and emissions of sulphur oxides.  Canadians have little to be proud of in our management of our environmental impacts, and weakening of environmental regulations, particularly ones that may help develop responsible practices in particularly dirty industries is clearly not the right approach in this country.  Our tar sands developments have impacts that directly contribute to emissions of nitrogen oxides, sulphur oxides, and greenhouse gases; to water withdrawals, to forest cover change, and to energy intensity (although they are not the only, nor always the major, contributor to each of these).

How does the Harper government interact with voters, the Canadian people?  Well, Harper grudgingly met with First Nations leaders, and Idle No More continues to protest, while waiting to see if that meeting is leading anywhere or not.  How about the rest of us?  Out on the west coast the National Energy Board is conducting its public hearings concerning the proposed Northern Gateway Pipeline, the one through magnificent natural lands from Alberta, across the Rockies and down to the British Columbian coast.  The one that we have already been told by Mr. Harper and his Ministers is so essential to our economy that anyone who speaks against it is a terrorist, and probably supported by foreign funds.  But the public hearings do not seem to be the sort of friendly, constructive exchanges of views that the Harper government arranges with the fossil fuel industry, “frequently” according to CAPP President Collyer.  Pete McMartin has described the “public’ hearing in Vancouver last week.  The committee meets in a small room, with three members of the public at a time, and with about 8 other people, mostly media, present.  People waiting to provide testimony wait in a small room well down the hall.  The public watches the show on closed circuit TV beamed to a room in another hotel several blocks away. 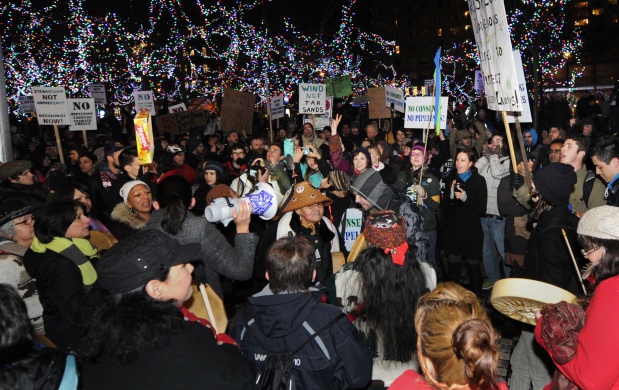 Protestors including some Idle No More participants, outside the Northern Gateway public hearings at the Sheraton Wall Centre, Vancouver.  Photo by Steve Bosch PNG, Calgary Herald.

It’s a pity when the government of a democracy becomes unable to speak to its employers, the people.  It’s actually a lot more than a pity, and Canadians have a right to complain that their government is not doing what it was elected to do, govern for and on their behalf.  Much of the testimony being presented in Vancouver (as in other centers earlier) is well reasoned, with cogent arguments that should be carefully considered.  We in eastern Canada are not hearing much about these hearings (our silent media again but see), but outlets in BC are providing some sense of what is going on.  Carrie Saxifrage, for example, a reporter for the Vancouver Observer, provided an individual submission that centered on the issue of the externalization of environmental costs that is characteristic of the way in which multinational corporations in the oil and gas business like to do business, and on the impacts on future quality of life that rampant exploitation of the tar sands will unleash.  These are messages the Harper government needs to hear, but it seems everything is being done to ensure that they do not really get heard.  A public hearing in a tiny room behind closed doors – yes, I think there are definitely good reasons to support and to join up with Idle No More.  We DO have common cause.

One Response to Idle No More, Environment, Access to Government, and Canada’s Deplorable Environmental Performance